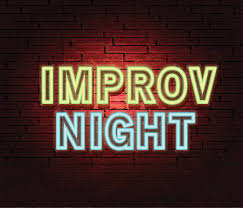 Here at Bingham we have a team of young actors that love to improvise a story and characters. They are part of our Improv team. But what does the improv team do?

Mr. Hess, Bingham’s Improv coach, shared that “ Improv is the art of creating content on the spot with no more than a simple suggestion (or absolutely no suggestion, if you want to push yourself). It can be either comedic or dramatic, though most people associate a comedic aspect to it, and that’s primarily what improv is known for.”

Each member contributes something different to the team and according to Mr. Hess, “Improv is first and foremost a team activity, so just being funny doesn’t always equate to getting on the team. I look for more than a funny bone. I especially pay attention to how people work off of each other.”

In describing the different skills the team members bring to the group, Hess added,“ Some are excellent at thinking outside the box, while others are great at exploiting what already exists inside it. Some are big and charismatic with others being more focused and reserved. All have unique and fun ways of looking at the world around them (everyone naturally does this, but being able to recognize it is key). There are skills directly tied to improvisation that they all learn, but how they use it is directly tied to them as an individual.”

Bingham’s Improv team does shows at our school that are always very popular. Not only that, but they also have other festivals and competitions. Mr. Hess explained, “ There are festivals and small gatherings that happen frequently, but ‘competitions’ are few and far between. If multiple improv troupes get together in one place, most of the time they each have a set amount of time, everyone performs, everyone laughs, and we all go home happy. But there are a few competitions that Bingham participates in. One is down in Cedar City during the Shakespeare Festival in October called ‘Ye Ol’ Improv Competition,’ and the other is at Skyline High School throughout the year called ‘The Cage Match.’”

Dominique Morrison who is the improv captain explained some basics about improv: “We have two go to rules that we stick to with performances: ‘yes and’ and make the other person look good.” She continued, “‘Yes and’ just means that no matter what our scene partner(s) may present, we accept it and then add on to it.” This method is part of the creative process that makes an improv show successful.

Morrison added that one thing she likes about the team is that “Improv brings the student body together.”