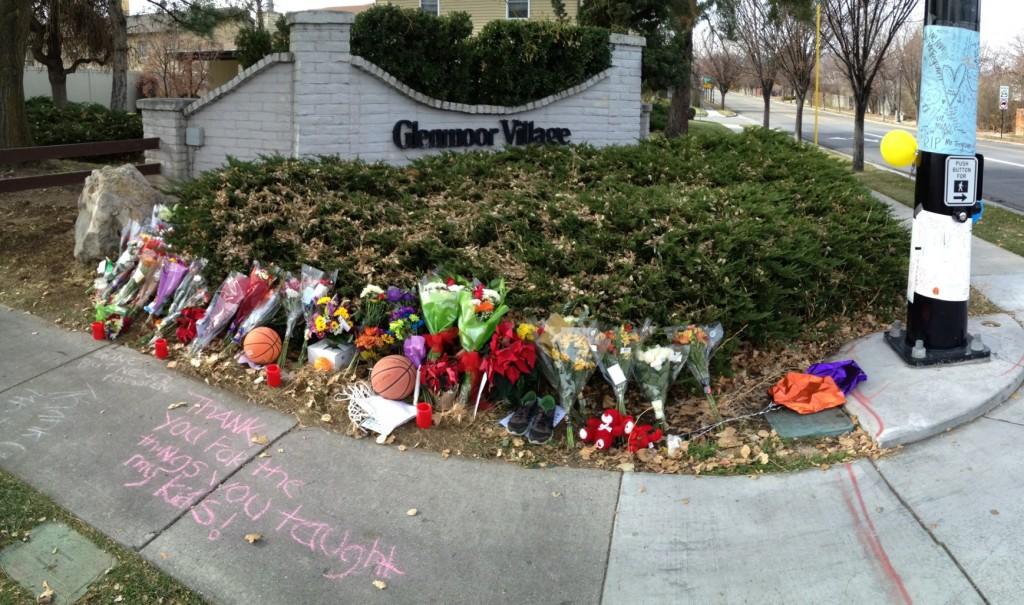 Mr. Treglown was jogging to his job at the school, as he often did, when he was hit by a white pickup truck around 6:40 a.m. at the intersection of 4000 West and 9800 South. An ambulance came to take Mr. Treglown to the middle school’s parking lot where a medical helicopter was waiting to take him to the hospital, but he died before reaching the helicopter.

The driver of the white pickup truck allegedly stopped after running a red light when he realized he had hit Randy Treglown, who was wearing dark clothes and was not seen.

As a teacher of nearly 16 ½ years, Mr. Treglown was known by his colleagues and students for his impacting actions and examples.

“He was well-liked by students,” said Principal Mr. Urry. “They knew they could trust him and he was dedicated to them.”

“He never did anything wrong,” said Josh. “I was really sad when I heard about him. He was a good example.”

Josh and many others have placed flowers, basketballs, running shoes, and other items on the corner of the intersection where the accident occurred. Students and faculty have also shown respect for Mr. Treglown by signing posters hung in the halls, wearing Elk Ridge shirts, placing flowers on the chair he was famous for sitting in, and many other ways. There has even been a savings account set up with Jordan Credit Union named the Randy Treglown Memorial Fund. Although Mr. Urry stated the students are handling it well, students are also very saddened.

“You could feel the sadness in the air,” said 9th grade Elk Ridge student Sarah Garee. “It will never be the same with him gone.”

Many teachers at Elk Ridge also believed Treglown to be a hard-working, honest, and righteous person.

“He was comfortable deciding between right or wrong,” said Craig Downs, P.E. and Health instructor at Elk Ridge.

“There is so much love in this building because of the kindness and respect for this man,” said Vice Principal Audrey Fish. “He was positive and encouraging.”

Those who knew him expressed gratitude as well as sadness.

“We are all so privileged to have Randy as part of our lives,” said Sharon Wehan. “His integrity was impeccable. He was fair, honest, and did everything he asked his students to do. He is the most ethical person and most Christ-like example in my life.”

According to Ms. Wehan, Randy Treglown had shingles and plantar fasciitis, yet he still ran with his students and only sat in his famous chair when his students changed after class.

“The three of us coaches were such a team,” said Ms. Wehan. “It’s like losing a third of yourself to have Randy gone.”

Mr. Treglown also affected students at Bingham High School, being many of their former gym coach.

“He taught me to push myself, to do the right thing,” said Bingham senior Konnor Grimshaw. “I’m known for working hard and running fast, and that’s because of him.”

Along with gym, Mr. Treglown also coached some Miners in basketball.

“He had quite a large impact,” said junior Josh Medeiros. “He taught me everything I know about basketball. He gave me some great life lessons and knew how to tear it up on the court.”

Bingham Sophomore and basketball player Casey Slaughter stated that Mr. Treglown helped him with his basketball shot and with his shyness, which Treglown could relate to.

Students at Bingham dressed up in nice clothes and wore their Elk Ridge shirts on November 29th in honor of Randy Treglown, his son, Bingham junior Jordan Treglown, and the rest of Treglown family.